It’s that time of year again!  Forest and I don’t follow college basketball — or any college sport — but every year we fill out a March Madness bracket and make a fun little bet!  Check out previous year’s here and here.

I am currently the undefeated champion and I don’t plan on that changing this year. 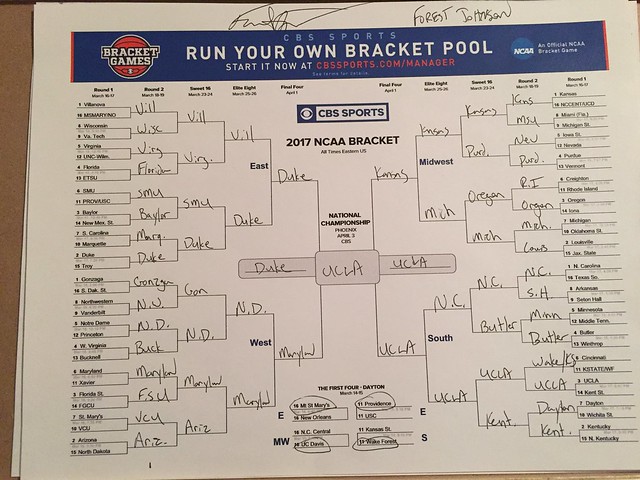 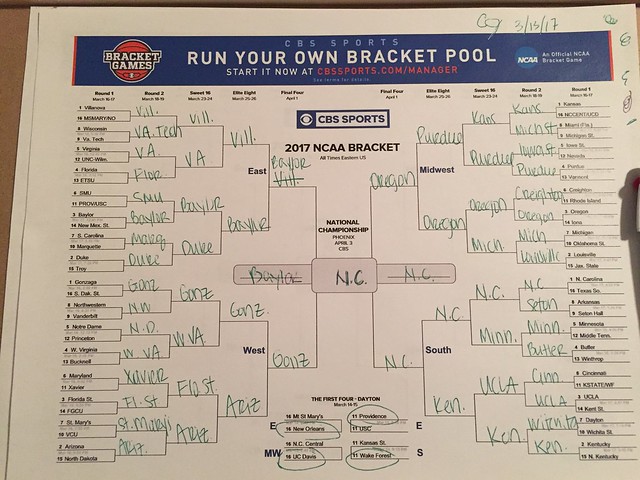 Our bet this year is the winner gets to pick a destination for a family weekend getaway and the loser has to drive.  We don’t like driving so this is a true punishment!

For the second year in a row I’ve managed to win our March Madness brackets!

This is definitely going to be something we do every year.  Well, as long as I keep up my winning streak.

Forest just happened to pick the wrong upsets in the first few rounds so he didn’t really have a chance to make up any points at the end, especially since we had the same teams playing in the championship game and the exact same team winning.  He was pretty bummed he lost but mentioned that maybe I should start entering pools and winning some money for my good picks.  Ha!

The main point is that Forest will be on poopy-diaper-duty for a whole week in just a few weeks.  He’s pretty good about learning new things quickly, though, so I’m not too worried for him.  I’ll just make sure to have my camera nearby in case there are any messy mishaps. :)

Last year Forest and I completed March Madness brackets and made a bet.  (You can read more about it here.)  I was the winner so when we finally decided it was time to adopt a dog in September, I got to make the final decision on which one we brought home and Forest got to pick the name.

Well…. we’re doing it again this year!  We filled out our brackets the night before the games started and we started discussing wagers.  Forest had some clever ideas – loser changes the first week of baby girl’s dirty diapers, loser must talk in a British accent for an entire day, or loser is required to wear an outfit in public that the winner chooses.  He also had some not-so-clever ones – loser is the only one who has to wake up in the middle of the night if baby girl is up.  (Not happening.)  I had none.  Ha.

And here are our 2015 March Madness brackets! 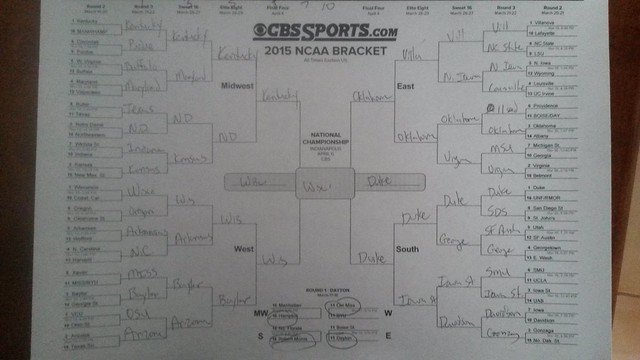 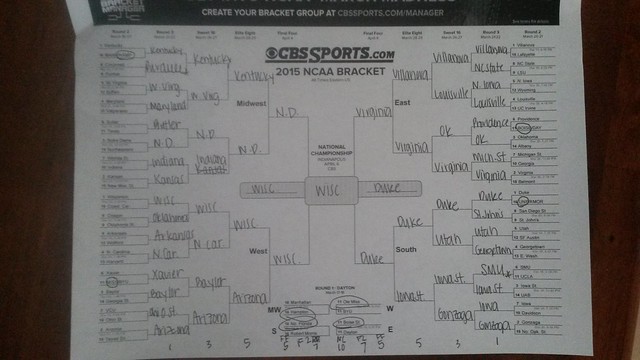 We never share our picks until we’ve decided their final so I think it’s funny that we both have Wisconsin & Duke playing in the end!

We finally decided that the bet will be: loser changes the first weeks’ worth of baby girl’s poopy diapers.  In which case I hope Forest loses because I know how to change a poopy diaper and I think it will be adorable watching him learn how and knowing he’ll be the sole poopy-diaper-changer the rest of the week.

Did you fill out a bracket?  If so, was it just for fun or did you make a bet with someone?  And has it already ruined by some of these upsets?  If not, who would you vote to win our wager this year?

a view from the shore
Create a free website or blog at WordPress.com.