We’re celebrating our FIFTH wedding anniversary and I don’t have an abundance of words to write except these past five years have been overflowing with memories and I look forward to the next ninety (five) years! 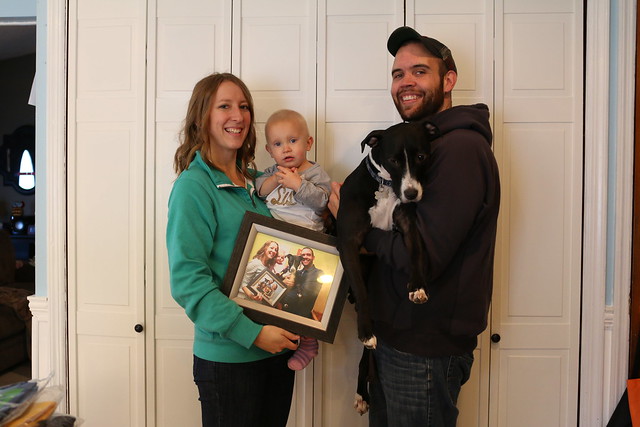 Unless you live under a rock you’ll know that Trump won the presidency.  A lot of people don’t know what to say, others are happy and, while I’m not going to share my personal political views, I will encourage everyone to pray for our country and for the president-elect and the people that  will be surrounding him.  I’ve seen a lot of people encourage kindness, regardless of the outcome and I would like to encourage the same – kindness will keep us united, not hateful words.

Peyton is battling either a cold or she’s teething or both but she’s been a trooper as I follow her around with a kleenex at all times.

Forest ordered his regalia (cap & gown) for graduation next month!  I’m so excited and proud of/for him!

Forest and I are celebrating our 5th wedding anniversary on Saturday.  We don’t have any huge plans for the day but I love that guy to pieces and there are never enough words to express just how much.

I’ve mentioned it before but are you guys watching the new show, This Is Us because if I haven’t you definitely should be.

I waiting for the right sale to hit the ORDER button for our Christmas cards.  We’ve always ordered ours from Shutterfly.

Peyton isn’t in school and won’t be for awhile but but for those of you with kids in school – school lunch ideas.

On this very day 11 years ago, a small town girl said YES to dating a small town boy and they never looked back.  I’m so extremely thankful for high school Spanish class, physics homework, and new cell phones that we used to call each other late at night to talk about everything under the sun. (you can read about how we started dating in THIS POST).  Forest, 11 years ago I said yes and I would do it all over again in a heartbeat.  You’ve been the peanut butter to my jelly and my greatest supporter.  Thank you so much for loving me!

I Facetimed with a friend today and even though I had several interruptions (hi there crying-baby-who-is-supposed-to-be-napping and FedEx guy), it was a sweet time to catch up.  I’m always so encouraged by this lovely lady and I think she’s the sweetest.  And I would say the same things even if she hadn’t just celebrated her birthday. :)

My mom has been going through/is going through some tough stuff recently (she is such a tough woman and is such an inspiration and I really wish she WASN’T going through any of this) but today she got a bit of good news from her doctor and I’m over here doing happy dances and praising God for his healing hands.

Tomorrow if Friday and I’m going into work.  And I’m not looking forward to it.

Peyton has entered the stage of mini-tantrums.  If she doesn’t get her way (mostly if she’s tired and we try to set her down after carrying her on our hip) she will bend herself in half while she’s sitting on the floor and fake-cry into the floor OR she’ll throw herself backwards and fuss.  She’s hit her head a couple times doing that though so she doesn’t do it as often.  BUT she’s also all about Indie recently.  She will wrap her arms around Indie’s neck to give hugs and she gives kisses every chance she gets.  Peyton loves to think Indie is chasing her.  Just today Peyton was by my feet as I was washing dishes and Indie came into the kitchen, minding her own business and not even looking in our direction, and Peyton shrieked and screamed and buried her head in my legs, laughing the whole time.

I photographed TWO weddings at the end of July and as of today, I have delivered pictures to both couples.  OH YEAH!

Take me back to Lake Placid, please!  We had such an amazing vacation last week.  Perfect weather, no agenda, relaxation to the max!  I’ll be posting about it (hopefully) next week!

Forest started his LAST SEMESTER OF GRAD SCHOOL this week!  I’m so proud of that guy!  He’s going to be busy with 2 classes but he’s going to rock this semester and walk at graduation in December!

Forest and I started working out again this week (vacation interrupted our previous attempt to be consistent) and we are SO sore!  We were doing T25 but it just wasn’t cutting it for me.  I didn’t feel like I was getting a good workout so this week we popped Jillian Micheal’s (we’ve had this DVD for a few years but the workout is still effective!) in and yeah, I’m feeling it!

Does anyone have advice on drinking more water during the day?  I’ve never had a problem drinking water while I’m at work but now that I’m home more during the week I often realize I haven’t been drinking water until lunch time and then I try to guzzle as much as I can the rest of the day (and usually don’t do a very good job about it!)

And I’ll leave you with this: A few summer slow cooker ideas. 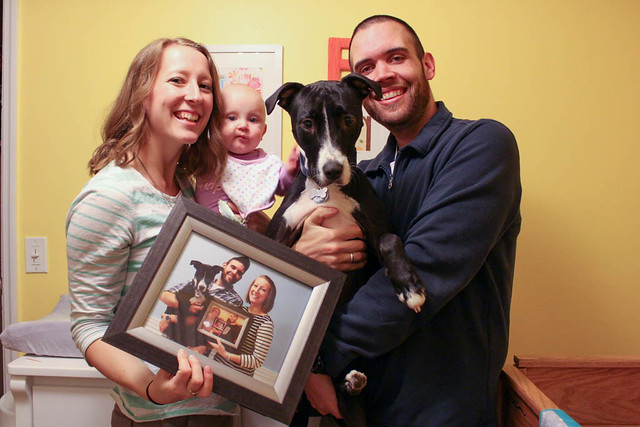 Forest and I celebrated 4 years of marriage last week, November 12, 2015.  We took the picture above that night after dinner, before Peyton got sleepy and ready for bed.  I don’t know how we managed to get all of us looking at the camera but we did and I L.O.V.E. it!!

We were reminiscing those 4 years on our anniversary and I can’t believe all of the things we’ve done and the experiences we’ve shared.  Our wedding was such a sweet and amazing day and I looked forward to it for so long.  But it was only the beginning!  Obviously.  Any marriage begins with a wedding but it was only the beginning of so many great things I didn’t know I should be looking forward to.  Not just the fun things like vacations, holidays, anniversaries and babies but the mundane things, too, like evening walks, Friday nights in, yard work on a beautiful Saturday afternoon and buying chairs.  Of course marriage isn’t always fun things and we’ve had our share of bad moods and disagreements but when we were thinking back on our 4 years of being married, the good moments are the ones that stand out and I couldn’t imagine ‘doing’ life with anyone else.

So speaking of experiences shared, we added a new one to the list!  A few weeks ago Forest asked if I’d be able to find an up-to-my-standards babysitter for Peyton for a few hours on Nov 14th because he had ‘reservations’ for us.  I found a babysitter well in advance (I had several in mind so it was just a matter of who was available) and often wondered what we would be doing that required reservations on a Saturday afternoon.  So November 14th finally arrived and I asked Forest in the morning what I should wear.  His only response was “I don’t know, something comfortable.”  I didn’t know how comfortable or how casual was acceptable – I didn’t want to waltz in wearing workout clothes and get funny looks – so Forest pulled up the website on the iPad.  ROCK CLIMBING!  We had a 1-hour ‘private session’ at a rock climbing place nearby – Gravity Vault. 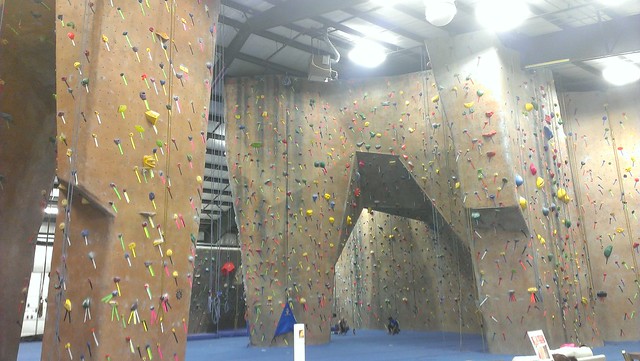 Our first few climbs were easy – we could climb using whatever holds we wanted or could reach.  The next several climbs were a little more challenging – we had to follow a path and were only able to use the holds that were marked with a certain colored tape.  Our arms were starting to get wobbly after the 3rd or 4th time up the wall but we kept working through several more before our arms just wouldn’t cooperate anymore.  I was nervous when we got there.  It’s pretty intimidating seeing really high walls that you’re supposed to climb to the top but I was impressed at how well we did.  Forest, who is afraid of heights, scaled the first wall like he’d done it several times already.  It was such a rush to make my way to the top of the wall that I didn’t even notice how high I was! 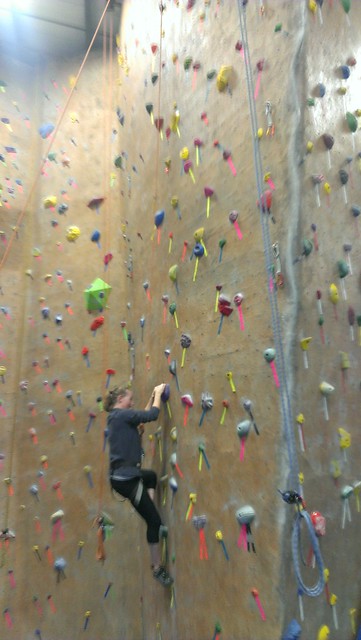 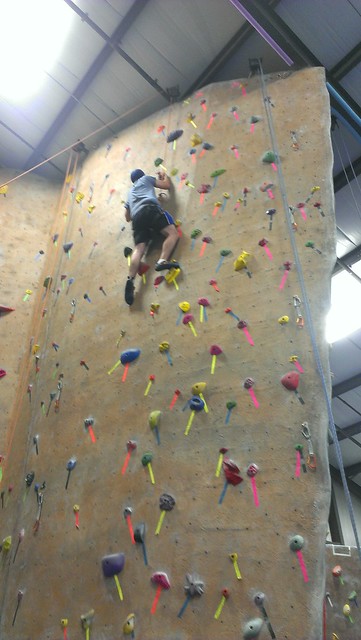 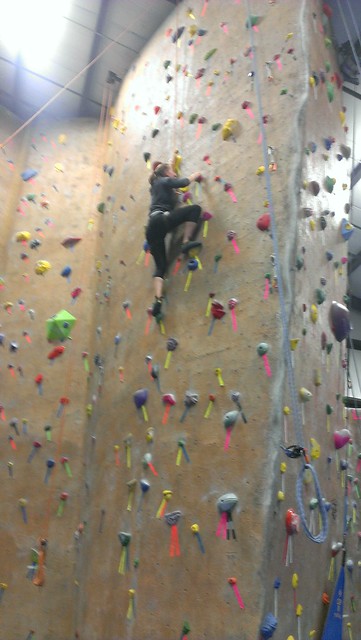 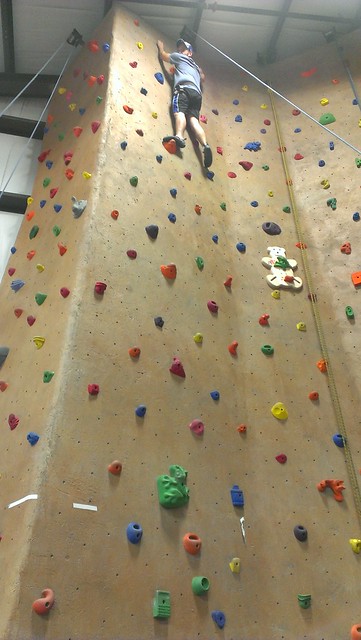 We headed to dinner after our 1-hour was up – Texas Road House – and we could barely lift our water glasses to drink.  I think we’re both back to normal by now, thank goodness.  Picking up a baby with wobbly, jello arms isn’t for the faint of heart.

a view from the shore
Blog at WordPress.com.